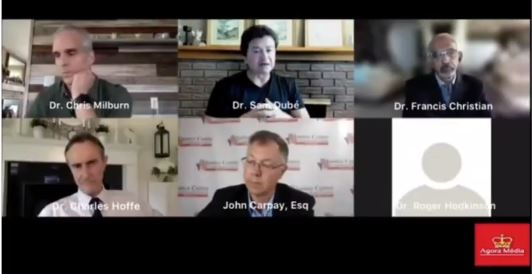 (alternate video in link above)

A Canadian doctor demands further study into the link between Covid-19 vaccines and blood clots after his research found clots in a majority of vaccinated patients, some of whom he says could be dead within three years.

During a Zoom meeting with other medical professionals, Dr. Charles Hoffe explained he’s been running a study on recently vaccinated patients, having them take D-dimer blood tests to determine whether they have blood clots.

Have an important tip? Let us know.EMAIL US HERE.

A Canadian doctor demands further study into the link between Covid-19 vaccines and blood clots after his research found clots in a majority of vaccinated patients, some of whom he says could be dead within three years.

During a Zoom meeting with other medical professionals, Dr. Charles Hoffe explained he’s been running a study on recently vaccinated patients, having them take D-dimer blood tests to determine whether they have blood clots.

“So far I’ve got 62 percent positive elevated D-dimer, which means that the blood clots are not rare,” Hoffe informed fellow physicians.

“That’s what the so-called experts keep telling us: ‘The clots are rare.’ The big ones are rare, but the small ones are clearly happening in the majority of people, 62 percent.”

Dr. Hoffe says the clots, which could number in the thousands and are hard to detect due to their microscopic size, are caused by messenger RNA molecules in the vaccine which cause spike proteins to form, which in turn attach to the cell walls of a cell impeding blood flow and damaging blood vessels.

So normally the cells that surround your blood vessels have to be very, very smooth to enable good and unimpeded flow of blood, but as soon as you’ve got all these little spike proteins that become part of the cell wall it’s now a rough surface. It’s going to be like a very coarse sandpaper. It’s now what the platelets are going to interpret as a damaged vessel. It’s no longer smooth. It’s rough. So clotting is inevitable because the platelets that come down that vessel are going to hit a rough spot and assume this must be a damaged vessel. This vessel needs to be blocked to stop the bleeding. That’s how our clotting works. So…because of this and because of the nature of this, clots are inevitable, because of these spike proteins in the capillary networks.

The damaged vessels don’t regenerate like other tissues and organs and instead remain permanently damaged, and because the clots are so tiny and scattered they bypass typical medical detection methods.

Hoffe, who was put under a gag order by the Canadian government after warning about the concerning trend, says this process could be why nearly all vaccinated people experience similar negative side effects.

“In fact, all of the frequent side effects of the shot, which are headache, nausea, dizziness, fatigue, could all be signs of cerebral thrombosis on a capillary level. I mean…literally you could be having thousands and thousands of tiny, tiny little clots in your brain that won’t show on a scan, but they will give you those exact symptoms,” Hoffe stated.

The doctor also detailed how six of his vaccinated patients have all suffered “reduced effort tolerance,” meaning they get tired quicker while doing normal everyday activities.

Hoffe says the damaged vessels and damaged lung tissue are a big problem that would lead to “pulmonary artery hypertension,” or high blood pressure in the lungs and death within three years due to increased vascular resistance.

“The concern is: because these vessels are now permanently damaged in a person’s lungs, when the heart tries to pump blood through all those damaged vessels there’s increased resistance trying to pump the blood through those lungs.”

“So those people are going to develop something called ‘pulmonary artery hypertension’ – high blood pressure in their lungs, and the concern with that is that those people will probably all develop right-sided heart failure within three years and die because they now have increased vascular resistance through their lungs.”

During the virtual meeting, other doctors in the Zoom call appeared shocked and somber at Dr. Hoffe’s tragic news.

If Hoffe’s research turns out to be right, the Covid vaccine could be the mass-culling depopulation event the globalists have been waiting for.

Let’s hope to God Dr. Hoffe’s theory somehow turns out to be incorrect.