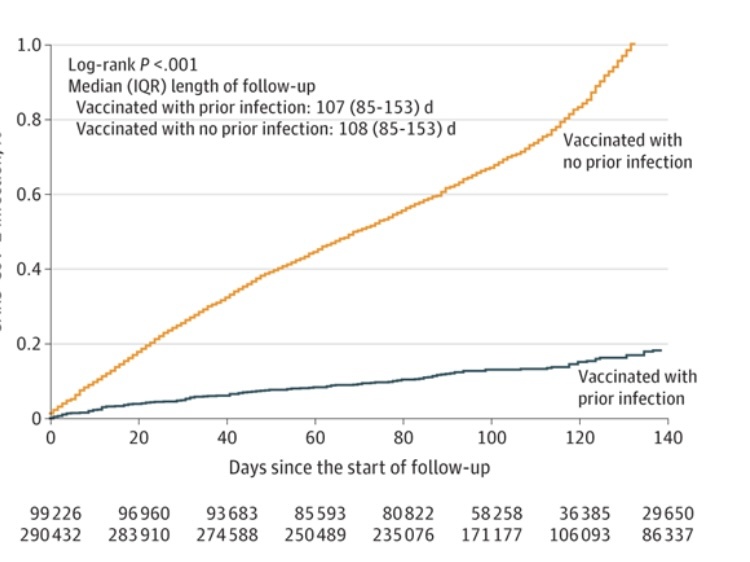 Researchers looked at about 140,000 people who had received either the Pfizer or Moderna vaccines after a previous Covid infection and 400,000 who received the vaccines and had no prior infection.

No surprise, they found combined immunity is far superior to vaccine-only immunity.

After adjusting for age and other factors, people who had received vaccines but didn’t have natural immunity were about SIX times as likely to be infected with Covid as those who had a base of natural immunity.

First, the researchers did not include a third comparison group – people who had natural immunity but didn’t receive vaccines. Doing so would have been an obvious step, and I’m not sure why they didn’t. Perhaps they couldn’t find enough people, as Qatar has very high vaccination rates.It is important to understand this finding does NOT prove that the vaccines offered ANY additional protection beyond natural immunity to people who had already been infected.

Second, the 6x rate ratio is in the range of what Israeli researchers found when they directly compared natural-only and vaccine immunity in a similar large study in August.

Third, the study found a notable trend towards a WIDENING gap between the natural-plus-vaccine group and the vaccine-only group in months five and six – when we know vaccine efficacy fades.

Infections in the natural-plus-Pfizer-vaccine group remained roughly steady throughout, at about 5 per 10,000 per month. But after starting at about 20 per 10,000 month in the first four months, infections in the Pfizer-vaccine only group doubled in month five and doubled again in month six, to 80 per 100,000 per month. (The researchers didn’t have six months of data on Moderna, which was used later in Qatar.)

The fact that the natural-immunity-plus-vaccine group didn’t see a similar rise in infections in later months is strong circumstantial evidence that the vaccine was NOT helping them early on.

The obvious inference is that their immunity remained strong throughout, because the vaccines weren’t helping it.

But the researchers hardly commented on their MOST interesting finding:

What does this mean?

The scientists divided people with natural immunity into two groups. One group had been infected and recovered well before they received their mRNA shots (at least six months). The other had been infected sooner.

They found that people who had been infected more than six months before being vaccinated had were much less likely to be reinfected as those vaccinated sooner.

So? Why should we care?

The Qatar paper at least suggests that the vaccines may hinder that evolution of memory B-cells. In other words, they may actually damage the body’s ability to build broad protection against reinfection.

These are not rhetorical questions, by the way. All thoughts welcome.