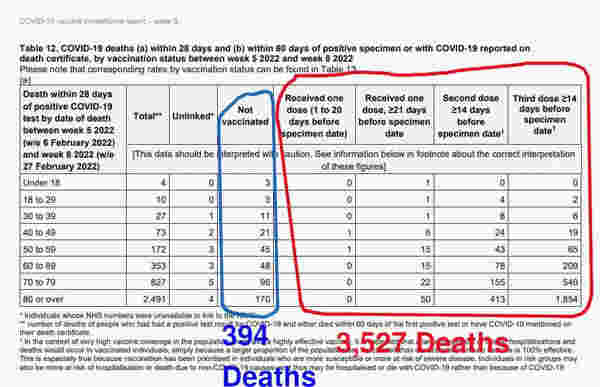 Share to the world...
Source Link: https://amgreatness.com/2022/03/04/covid-vaccine-bombshells-you-probably-didnt-hear-about/
When a critical mass of American people realize what has been done to them, there will need to be a reckoning.
By Debra Heine
March 4, 2022

In recent weeks, there have been several stunning revelations concerning the COVID-19 mRNA vaccines—and they are being all but ignored by a corporate media eager to change the subject.

The FDA on Tuesday released a large tranche of Pfizer clinical trials documents in response to a Freedom of Information (FOIA) request by the Public Health and Medical Professionals for Transparency. The documents show that the company knew people were at risk of experiencing more than 1,000 unique adverse side-effects to the mRNA injections.

Additionally,  scientists last week revealed that Pfizer’s COVID-19 vaccine can enter human liver cells and be converted into DNA—something the fact-checkers and the U.S. Centers for Disease Control assured the public could never happen. Scientists also recently discovered that a sequence of genetic material patented by Moderna in 2018 bears a suspicious similarity to the spike protein in Sars-Cov2.

And a new study published on March 2 found that the synthetic mRNA found in the vaccines does not degrade quickly as promised, but continues to produce spike proteins for nearly two weeks.

Amid these new discoveries, the medical establishment won’t stop pushing the genetic vaccines that have failed to stop the coronavirus.

The COVID pandemic now plays second fiddle to the Russia-Ukraine war in the media, but the virus continues to rage through highly vaccinated countries, afflicting the triple-vaxxed most of all.

“Hong Kong hospitals can’t keep up with the deaths amid an Omicron surge,” reads a recent New York Times headline. “Dead bodies are piling up on gurneys in hospital hallways as Hong Kong’s health system is overloaded by its biggest Covid-19 outbreak of the pandemic.”

In the United Kingdom, only 394 vaccine-free persons died in weeks 5-8 of 2022, compared to the 3,527 who were vaccinated, according to the UK Health Security Agency. This means unvaccinated Brits only comprised 10 percent of all COVID deaths during those weeks. In the face of failure, tyrannical medical policies continue to disrupt our lives, including the military mandate, the CMS mandate, the blocking of early treatments, and the appalling push to inject children with the ineffective experimental vaccines.

Here’s a partial list of potential vaccine injuries the medical establishment is subjecting us to, as chronicled in Pfizer’s clinical trial documents.

It’s no wonder Pfizer wanted to hide the data for 75 years.

“This is a bombshell,” said Children’s Health Defense (CHD) president and general counsel Mary Holland. “At least now we know why the FDA and Pfizer wanted to keep this data under wraps for 75 years. These findings should put an immediate end to the Pfizer COVID vaccines. The potential for serious harm is very clear, and those injured by the vaccines are prohibited from suing Pfizer for damages.”

Another bombshell from Current Issues of Molecular Biology helps explain why the messenger RNA shots are so dangerous.

The Swedish study, released last week, found that the mRNA from Pfizer’s COVID-19 vaccine is able to enter human liver cells and can be converted into DNA, as reported by the Epoch Times.

The researchers found that when the mRNA vaccine enters the human liver cells, it triggers the cell’s DNA, which is inside the nucleus, to increase the production of the LINE-1 gene expression to make mRNA.

The mRNA then leaves the nucleus and enters the cell’s cytoplasm, where it translates into LINE-1 protein. A segment of the protein called the open reading frame-1, or ORF-1, then goes back into the nucleus, where it attaches to the vaccine’s mRNA and reverse transcribes into spike DNA.

Reverse transcription is when DNA is made from RNA, whereas the normal transcription process involves a portion of the DNA serving as a template to make an mRNA molecule inside the nucleus.

“In this study we present evidence that COVID-19 mRNA vaccine BNT162b2 is able to enter the human liver cell line Huh7 in vitro,” the researchers wrote.  “BNT162b2 mRNA is reverse transcribed intracellularly into DNA as fast as 6 [hours] after BNT162b2 exposure.”

BNT162b2 is another name for the Pfizer-BioNTech COVID-19 vaccine that is marketed under the brand name Comirnaty.

The entire process reportedly takes place quickly within six hours, so after only one shot of the Pfizer vaccine,  DNA of affected cells can be permanently altered.

Mathematician Igor Chudov noted on his Substack that this is something that wasn’t supposed to happen: “For over a year, our trusted ‘health experts and fact checkers’ kept telling us the opposite.” The CDC also denied that the vaccines can alter DNA in a post on its website titled: “Myths and Facts about COVID-19 Vaccines”: “The genetic material delivered by mRNA vaccines never enters the nucleus of your cells.”

Another bombshell story the media has ignored is a recent scientific discovery that casts new suspicions on what the heck was going on in the Wuhan Lab.

Scientists have found a unique sequence of genetic material patented by Moderna in 2018 in the virus’ spike protein.

Specifically, the virus has the genetic sequence CTCCTCGGCGGGCACGTAG, which is reportedly the mirror image of the  “MSH3” sequence in Moderna’s patent No. 9,587,003.

According to the Daily Mail, the scientists discovered a tiny snippet of code that is identical to part of Moderna’s gene “in SARS-CoV-2’s unique furin cleavage site, the part that makes it so good at infecting people and separates it from other coronaviruses.”

The structure has been one of the focal points of debate about the virus’ origin, with some scientists claiming it could not have been acquired naturally.

The international team of researchers suggest the virus may have mutated to have a furin cleavage site during experiments on human cells in a lab.

They claim there is a one-in-three-trillion chance Moderna’s sequence randomly appeared through natural evolution.

On Substack, Chudov offered a possible explanation for what happened:

The COVID virus was grown (cultured) in cell lines that used the MSH3-mutated cell lines:

Yes, that’s right. Every single one of these patents that contains that 19nt sequence (for which the probability of occurring by random chance is less than 1 in a billion) is from Moderna. [Note the sequence is actually the reverse complement sequence but this is likely a direct result of the cell lines that it occurred in – MSH3_mutated cell lines designed for developing cancer vaccines, the Moderna patent was actually for a mutated MSH3 gene for this purpose]

This sheds some light on lab origin of Sars-Cov-2. Whoever designed it used Moderna-patented genetically modified cell lines containing the complement of CTCCTCGGCGGGCACGTAG, to grow the virus.

Chudov analyzed the gene sequence and made a sinister discovery. Moderna’s patent (by Bancel et al.), he says appears to be about making cancer-causing proteins.

The specific sequence of the MSH3 mutation that we are discussing, is not a random mutation, it is a cancer gene added on purpose. It’s point is to ensure PRODUCTION OF ONCOLOGY RELATED PROTEINS, just like in the patent—the proteins that end up in the spike of the Sars-Cov-2 virus.
It possibly was purposely edited into the Sars-Cov-2 genome, just as HIV genes were edited in, and was not an artifact of accidental and sloppy lab work. Furthermore, CTCCTCGGCGGGCACGTAG is a key part of the spike protein and is present in the key location of the spike protein of the Sars-Cov-2 virus.

Add to this disturbing news, a new paper published in MedRX.com by Timothy Veenstra, Elisha Injeti, Bradley Pauley: “In vitro Characterization of SARS-CoV-2 Protein Translated from the Moderna mRNA-1273 Vaccine.”

The study shows that the mRNA in these genetic vaccines are not degrading rapidly once inside cells and that the Moderna vaccine continues to produce protein up until 12 days after transfection in this in-vitro model, Dr. Robert Malone, the inventor of mRNA vaccine technology reported on his Substack.

Remember, natural mRNA degrades usually within 45 minutes and no longer than a few hours. That this synthetic mRNA is not degrading rapidly is extremely worrying. Particularly as we also know that the synthetic mRNA is immunosuppressive.

According to Blaze columnist Daniel Horowitz, all of these stories are the reason why COVID has all but disappeared from headlines.

Between the military data, Israeli survey data, German medical insurance claims, and American life insurance claims, the data is coalescing around a shocking number of injuries that show VAERS reporting was lowballing the degree of injury. Recent reports about the vaccine potentially harming DNA repair and creating bone marrow suppression, and revelations of Moderna having patented a gene sequence several years ago that is now believed to be the driving force behind making the SARS-CoV-2 spike more pathogenic, certainly make any future news cycle focus on COVID less than auspicious for the powers that be.

The truth cannot be suppressed forever, and when a critical mass of American people realize what has been done to them, there will need to be a reckoning.