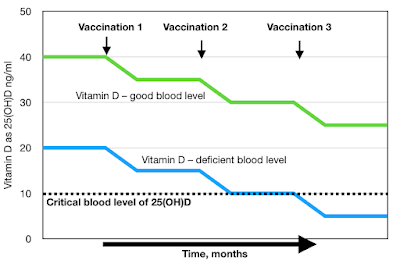 In this Blog post there are many Figures and a lot of numbers. The important points are in the text, which I hope can be read easily. The details in the Figures are for reference so as to demonstrate that the data are real.

My previous Blog post looked at data from the Public Health Agency Canada, PLAC. I identified that during the week April 10 to April 17 2022, there were 277 Covid-19 deaths. This is calculated by the total cumulative number on April 17 (16,002) minus the total cumulative number recorded on April 10 (15,775). Of the 277 deaths, 276 had received at least one vaccination and only one had not been vaccinated.

This might appear to be too extreme. Could it really be true? I was doubtful but when I analysed the data the numbers were real and they were published in official documents. Was this week somehow exceptional? What about other weeks?

The problem is that each weekly report by the PHAC is an update of the previous week, starting in December 2020. At that time all of the Covid-19 deaths were obviously in the unvaccinated, and during most of 2021 the majority would have been unvaccinated. It would be only at the end of 2021 that first people would be triple vaccinated, that is “fully vaccinated (x2) plus additional (booster)”. But the historic data are not of relevance at present, as it is “now” that is important to us.

We can subtract last week’s cumulative data from this week’s (always a larger number), but I am unable to identify data from previous weeks as previous data is contunally over-written. However by taking screen-shots each week it is possible to look at each week prospectively.

I described additional data from May 1st, two weeks data being identified by subtraction of April 17th and then averaged into two separate weeks. I can now display the data reports from May 8th, May 15th, and May 22nd a total of six weeks.

From the official PHA Canada reports I can display Table 2 of the two most recent updates.

Data from May 8th

Data from May 15th

Data from May 22nd

It is necessary to extract useful information from the data, for the six weeks that it is possible to analyse so far.

Covid-19 deaths during each week

This is the baseline week and so all we can see is cumulative data starting in December 14th 2020. Note that “vaccination <21days” implies that the vaccination has not had adeqaute time to induce immune protection.

The important data for April 10th is extracted in Figure 5. 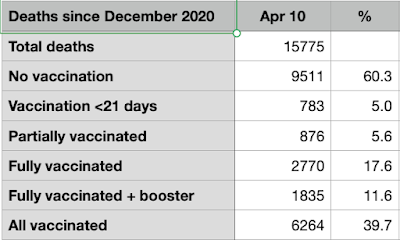 The fact that during the time from December 14th 2020 to April 10th 2022 60.29% of those who died from Covid-19 were not vaccinated does not lead to a useful conclusion. The proportion of the population vaccinated was increasing steadily, not a steady state. It does not tell us about “now”, but is frequently advertised by those who are promoting vaccination without being in possession of up-to-date facts.

The PHAC provides details of the vaccination profile of the nation, shown in Figure 6.

It is obvious that in the early weeks of the pandemic the numbers vaccinated was low, but at present 85% have received at least one vaccination and 82% were double (“fully”) vaccinated. 49% had been double vaccinated plus booster. 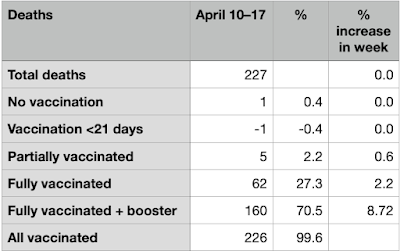 An important detail is the rate of increase of Covid-19 deaths related to vaccinatiion status. We can see that the increase had been greatest in those double (2.2%) and triple (8.7%) vaccinated.These are increases based on the data from April 10th (denominator).

We can also see that 226 of the 227 deaths (99.6%) during this week were in people who had been vaccinated, only one unvaccinated. This might be the result of 99.6% of the population of Canada having been vaccinated, but this is not the case (Figure 6) and we will look at it in more detail later, after we have looked at other weeks. Will this remarkable proportion continue into the subsequent weeks? 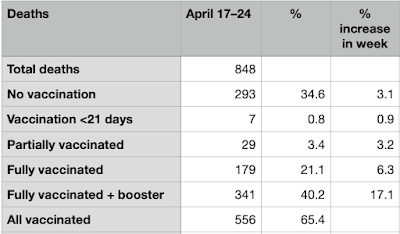 The answer is that the extreme result of the previous week was not repeated. However two thirds of the deaths were among the vaccinated, and one third unvaccinated. It appears that the rate of increase was the greatest among the triple vaccinated.

To assess the increase in each week it is better to concentrate on the precise numbers. We can see simply that 293 of those who died had not been vaccinated, whereas 556 had been vaccinated. This is 34.6% not vaccinated and 65.4% vaccinated.
It is important to note that 40% had been triple vaccinated.
Week April 24 to May 1 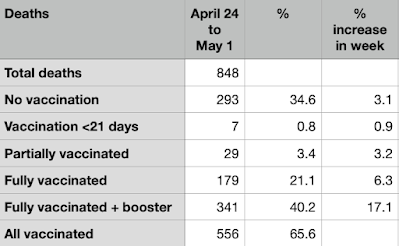 The data from this week are effectively the same as the previous week. PHAC published a two-week update and I have divided the data equally into two separate weeks. 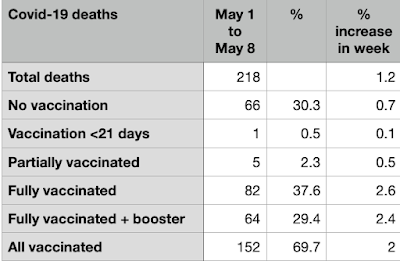 The number of Covid-19 deaths has been lower this week at 218. We can see the numbers for each vaccination status, noting that 30.3% of those who died with Covid-19 were unvaccinated and 69.7& were vaccinated, almost all double or triple vaccinated. 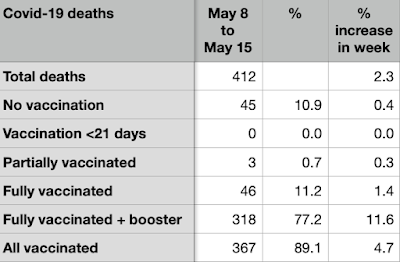 During this week there were 412 deaths, 10.9% in the unvaccinated, 89.1% in the vaccinated, the great majority being triple vaccinated. 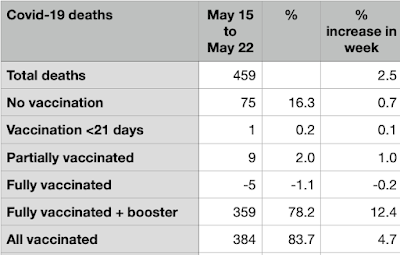 During this week, the sixth of the series, there were 459 deaths, 16.3% in the unvaccinated, 83.7% in the vaccinated, the great majority being triple vaccinated.

Most Covid-19 deaths are in the vaccinated
During this time period we have seen in Canada a consistent pattern of most Covid-19 deaths occuring in the vaccinated, especially in the triple vaccinated. This is of course the opposite of the official narrative, but unlike the official narrative it is based on up-to-date facts.
There is a problem. The deaths are numbers of people but we are not told of their ages. Is the age distribution the same in each of the vaccinations groups? We do not have the data. There is a possibility that the high death rate in the triple vaccinated might be influenced by them being older, but we cannot assume this to be the case. We must accept the data available, expecting refinement as the data are refined.
Composite data during six weeks
We can extract numbers from the tables shown above, firstly to show some variation in the number of Covid-19 deaths each week, Figure 12. The mean average is 361, which is 52 per day. 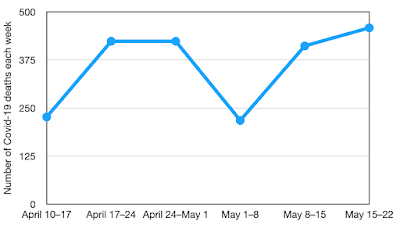 Figure 13 shows the proportion during six recent weeks of those dying who had received at least one vaccination. The average mean is 78%, corresspondingly 22% have been unvaccinated. This is not what we are told. 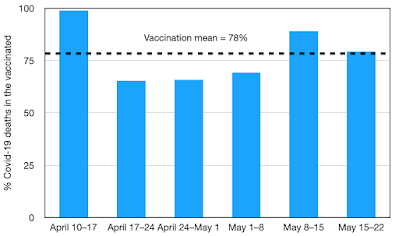 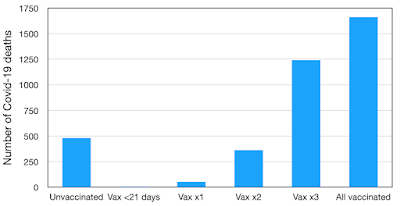 Most of those dying have been vaccinated, especially triple vaccinated. But….
Interpretation requires Caution
It is necessary to remember the extent of vaccination within the population of Canada, seen in Figure 6. Details are shown in Figure 15.

This is very important. The basic data presented above in Figure 14 has no real meaning unless it is standardised for the number of people in the vaccination group. We can achieve this by dividing the number of deaths in each group by the percentage of the population in each group. This is looking at ratios between the four categories of vaccination status. The results can be seen in Figure 16. 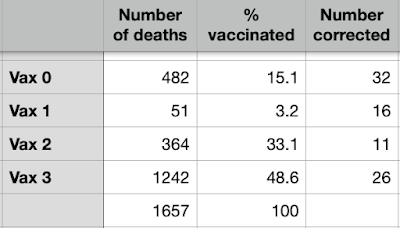 This can also be expressed graphically, Figure 17. 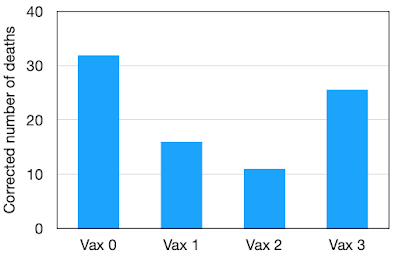 We can see that in data corrected for prevalence of vaccination, the Covid-19 deaths are higher in the unvaccinated group compared to the three vaccinated groups.
There appears to be mortality benefit from one or two vaccinations, but the benefit is lost in those with three vaccinations.
Conclusions
My understanding of this is that each vaccination creates an intense immune stimulation, its very purpose. However it is known that immune activation comsumes the essential Vitamin D, a molecule of which can be used only once and then it is irreversibly de-activated. It follows, but is as yet untested or unpublished, that successive vaccinations will consume Vitamin D and deficiency will result. Reduction of immunity will follow, including response to further vaccinations.
Vaccinations require Vitamin D, and so perhaps all we need is correction of widespread VItamin D deficiency to optimise natural immunity. This would reverse the apparent ineffectiveness of triple vaccination.
Vaccinations must be considered to be at least disappointing in their effectiveness. We have no controlled trials on which to judge effectiveness and safety, but observational data, such as from Canada, are disturbing. In many countries Covid-19 cases and deaths are higher at present than they were in 2021, Figure 18.

Some countries have seen the emergence of significant Covid-19 numbers only since the third vaccinations were introduced, for example in Australia, Figure 19. 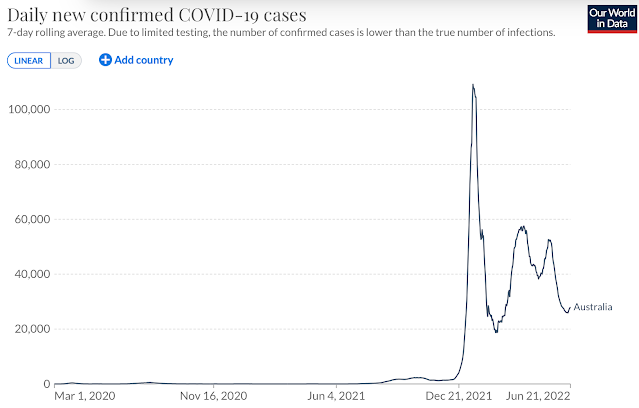 But we are dealing only with Covid-19 cases and deaths. When we look at total deaths, and cases and deaths from other specific diseases, the picture becomes increasingly disturbing.
Post-script: week of May 22nd to May 29th.
The data from Canada for the week May 22 to May 29 has just become available. The summary table and the full table are shown below, but I have not incorporated them into previous summary figures. 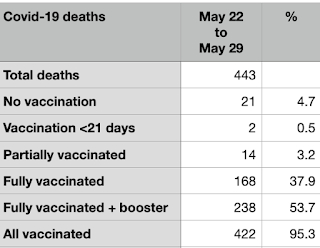 Once again we must remember that 85% of the population had received at least one vaccination and only 15% were unvaccinated. We can adjust for this as before to indicate death numbers as relative rather than less helpful “raw” numbers. These are the raw numbers divided by the proportion of vaccinations status, as in Figure 15. We see the result in Figure 21. 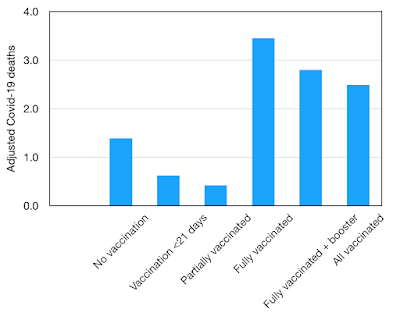 Once again we can see the failure of vaccination, especially multiple vaccinations, to protect against Covid-19 deaths.

This might have been prevented by correction of Vitamin D deficiency during the pandemic. It is not too late for public health initiatives to enhance natural immunity by using Vitamin D, especially as numbers of Covid-19 cases and deaths remain stubornly high.