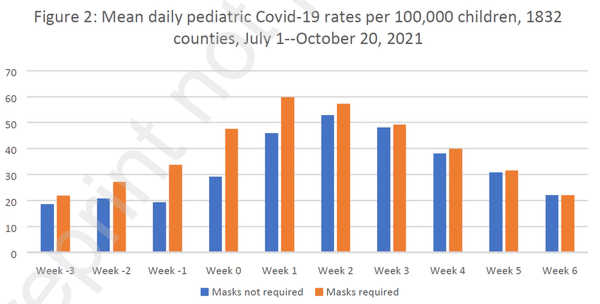 Last year, the CDC published a paper comparing Pediatric COVID-19 Cases in Counties With and Without School Mask Requirements. The authors looked at data from 520 United States counties, concluding that “Counties without school mask requirements experienced larger increases in … case rates … compared with counties that had school mask requirements.” Corona astrologers and face diaper fetishists everywhere have used the findings to argue for forcing healthy children who are at no risk to wear face masks for multiple hours each school day.


More county-level data on American infection rates and mask mandates has since become available, and two Toronto scientists have taken the opportunity to replicate the study, looking now at 1,832 counties. In a turn of events that will surprise nobody, they find that the larger dataset shows that mask mandates actually do zero, and that prior findings were almost surely an illusion.


Here are masked vs. unmasked case rates, using a smaller data pool similar to that from the CDC study: Yes, the maskless counties seem to do worse! Yet the Toronto authors point out that the original CDC study only considered infection rates through the second week after schools reopened, which turned out to be “exactly the peak of school case numbers for [their] sample of counties.” This obscured the fact “that cases quickly declined in later weeks and did so faster in counties without mask mandates.” Even the smaller sample used by the CDC study, in other words, showed no difference in masked vs. unmasked counties by the six-week mark.

In the replication, with a much bigger dataset, maskless counties never lead infections at all: The authors note that the CDC ended their analysis on 4 September 2021, and thus effectively excluded counties with a school-start date after 14 August, which entailed an oversampling of southern states. I’ll fill in the blanks here: Counties in the American south tend to have fewer school mask requirements, and they also tend to experience late-summer infection spikes related to high temperatures and extensive reliance on climatisation.

Although masks have become the most clearly discredited measure deployed against SARS-2 (which is saying something), they just won’t go away. Even in places that have lifted all Corona restrictions, a great many people continue to mask in public, and it seems likely that many countries – Germany among them – will retain vestigial mask requirements indefinitely, probably for years. Masking is a totally unsupported superstitious practice that does nothing against viral infection, and yet for precisely this reason, no amount of evidence will ever convince the maskers to stop.