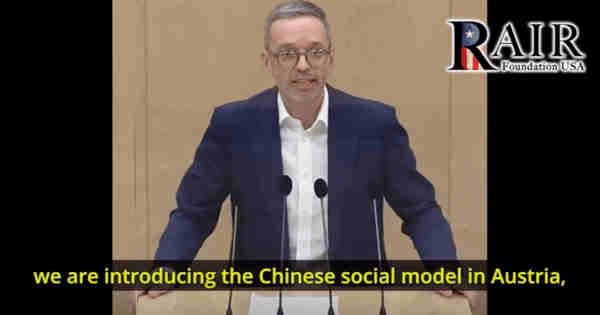 “This is the problem of this federal government: there is nothing left of your credibility after two years of this so-called Pandemic” – FPÖ Leader,
Herbert Kickl

Austria’s vaccine mandate law will take effect on February 1, 2022. Despite the evidence that the “vaccine” does not protect people from Covid but increases the chances of infection from Omicron and hospitalization, last week, the Austrian Parliament approved mandating the experimental mRNA gene therapy injections.

From mid-March, the law will see adults (residents aged 18 and older) who refuse the jabs subjected to steep fines and potential prison time. The vaccine order is expected to remain in force until January 2024, with the government investing €1.4bn in measures designed to target the unvaccinated and get them jabbed.

A majority of MPs, including those from the unelected Chancellor, Karl Nehammer’s governing leftist coalition, and the three main parties, backed the bill to mandate the injections by 137 votes to 33.

FPÖ Herbert Kickl: “You Will Not Escape Your Just Punishment”

The only real opposition to the measure was the Austrian Freedom Party (Freiheitliche Partei Österreichs, FPÖ). TheFPÖ is Austria’s only major political party fighting against compulsory Covid “vaccinations.”

Hours before last week’s vote to mandate the Covid vaccines, FPÖ Leader Herbert Kickl delivered a historic speechon the floor of the Parliament. The leader condemned his colleagues and vowed to continue his fight against their authoritarian actions.

The mandate “paves the way to totalitarianism in Austria,” statedKickl. He slammed the government for embracing China’s communist rule and for persecuting its citizens like criminals:
With this vaccination, ladies, and gentlemen, the way is being prepared for totalitarianism in Austria. It is nothing other than the introduction of HEALTH COMMUNISM.

It is a cruel irony of history that in order to fight a Chinese virus, we are introducing the Chinese social model in Austria, which is characterized by many things but not by freedom and democracy.

Health Minister [Wolfgang] Mückstein, who will tell us what is good for the masses, and whoever does not comply will be persecuted like a criminal. Ladies and gentlemen, this is a door opener for dilettantism and arbitrariness in equal measure, and can never gain our [Freedom Party’s] approval.
For more than a year, the Freedom Party has warned citizens that the government would use Covid to strip them of their freedoms while making themselves more and more powerful.
Think back to December 2020….we told the population: “Watch out, warning, it will all boil down to compulsory vaccination. Everything else is only a preliminary stage, and in the end there is total power for a government, and on the other hand the total abandonment and total powerlessness for the Austrian population.”
Furthermore, the leader condemned Parliament for smearing his party and accusing them of being “liars” when they warned of his colleague’s plans to mandate the  “vaccine.” Kickl read each of his colleague’s quotes which were made over a period of months, where they swore they would never support compulsory vaccines:
And now I ask you: who has told the untruth here, and who has lied to the people, and who has told the people the truth?

Every one of these statements that I have quoted, every single one — and these were by no means all of them — is a single stab into the heart of your credibility; you have bled to death in the meantime, as far as your credibility is concerned.

And you see, ladies and gentlemen, this is the problem of this federal government: there is nothing left of your credibility after two years of this so-called “Pandemic
While the Austrian Parliament is fighting to mandate vaccinations for citizens, other countries have begun to end their measures, explained MP Kickle. Spain wants to treat Covid like the flu, Great Britain is phasing out all measures, and the Czech Republic is abolishing the planned compulsory vaccination,
While all others abolish the measures, you want to drive everybody from age 18 up to great-grandma to take the needle. This is really a piece of insanity that you are introducing here today.
The Austrian Freedom Party leader vowed he would continue to refuse the experimental injections despite the new freedom-crushing law. Furthermore, he promised to overturn compulsory vaccination by using the existing administrative apparatus and democratic elections! “We promise you that”:
We will bring you down by appealing to the courts in all instances, and not only in Austria, and we will cause you to fall above all through democratic elections.

Yes, you, the yes-men of today, will not escape your just punishment tomorrow. You will succeed neither morally, legally nor politically. And you can be sure of one thing: unlike you, I keep my promises, including the one that I will, of course, continue to remain unvaccinated, even if you want to force me, and millions of Austrians, to do so.
Watch the powerful speech by FPÖ Herbert Kickl in the Austrian Parliament on January 20, 2022, just before the vote to mandate the Covid “vaccine”:

Further provingFPÖ Leader Kickl’s point that ChancellorNehammer’s government can not be trusted, on January 6, 2021, the Austrian government announced its new plans to force citizens into receiving more than two mRNA injections. The current unelected Chancellor has reduced the “Green Passports” validity to six months. As a result, millions of citizens who were considered “fully vaccinated” six months ago are now classified as “unvaccinated” by the government. The only way to get the document reissued for those who have lost their Green Pass is to receive a booster injection.

Around 3.8 million Austrians were considered “fully vaccinated six months ago.” They trusted Austria’s former ÖVP (Austrian People’s Party) Chancellor, Sebastian Kurz, and the Greens that if they received double injections, Covid would be over. Those who received the jabs believed they would have done their part to contain the virus, and soon everything would be back to normal.

The “vaccinated” appear to have been misled on many counts. Six months later, nothing is back to normal. Now the new ÖVP Chancellor Nehammer has declared all of these trusting people to be unvaccinated unless they submit to additional doses of the mRNA gene therapy.

In response to the government’s false promises, freedom-crushing restrictions, and mandates, tens of thousands of Austrians have taken to the streets each weekend to protest. In addition, Austrians have been begging for people worldwide to shine a spotlight on their government’s mistreatment of them.

Covid Numbers Spike – The Vaccinated Are Infecting Each Other

Just yesterday, the Austrian government was also forced to admit that their two-month-long discriminatory lockdown for the unvaccinated completely failed.

The lockdown was instituted after a supposed significant increase in ‘infections.’ However, during Austria’s lockdown for, the “unvaccinated” infections skyrocketed, which may indicate that it’s the vaccinated ‘infecting’ each other. Despite this glaring failure of the mRNA shots, the government is forging ahead with the country’s vaccine mandate la

Since mid-November, unvaccinated people have only been allowed to go outside to, for example, go shopping, play sports, or in some cases, work. The “unvaccinated” will still be barred from large parts of public life, including restaurants and non-essential retail.

Nick Hope, a 97-year-old Holocaust survivor imprisoned at the Nazi concentration camp Dachau, warned against the Austrian government’s authoritarian and totalitarian Covid measures. “When I look at the news in Austria, I see the spirit of Hitler, the spirit of force coming there,” he said in a video message recently posted at RAIR Foundation USA.

View all posts
Molecular Biologist Sona Pekova: The ‘Vaccinated’ Are More Likely to be Sick from Omicron (Video)