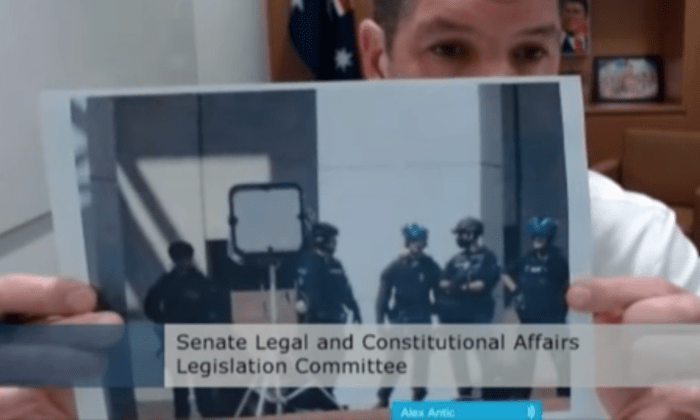 Australian Senator Alex Antic holds up an image of a long range acoustic device that was circulating on social media at a Senate estimates hearing in Canberra, Australia, on Feb. 14, 2022. (Screenshot by The Epoch Times)
Australia

Writer and Editor
Caden Pearson is a writer and editor based Cairns, Australia, with a background in screenwriting and documentary. Contact him on caden.pearson@epochtimes.com.au
View profile
Follow
February 15, 2022 Updated: February 15, 2022

Australian Capital Territory (ACT) Policing have confirmed the use of a Long Range Acoustic Device (LRAD)—often regarded as a sonic weapon—at the massive protest against vaccine mandates in Canberra on Feb. 12, despite the Australian Federal Police (AFP) commissioner describing the crowd as “well behaved.”

“ACT Policing has deployed several types of loudspeakers and amplification devices to quickly and effectively convey voice messages to large, and often loud, crowds of people during the recent protest activity in Canberra,” an ACT Policing spokesperson said in a statement to The Epoch Times on Feb. 16.

“The [LRADs] were only used to convey spoken-word messages. The ‘alert’ function was not used.”

LRADs, also known as acoustic weapons or sound cannons, are used to project very loud sounds over long distances. While the voice function can be helpful to communicate in loud settings, the device’s most dangerous setting, the alert function, can cause brain damage, permanent hearing loss, tinnitus (ringing in the ears), dizziness, and disorientation.

A fact sheet by the American Civil Liberties Union (ACLU) says the technology is used for crowd control by emitting loud and painful levels of noise that may lead to significant harm to the ears.

The LRADs work by using hundreds of transducers to create a highly concentrated and amplified sound that can be narrowed to focus on specific targeted areas. Similar devices were used by the U.S. military in Iraq in 2004.

Photos and videos circulating on social media show the LRADs positioned at the front of Parliament House facing towards the location of tens of thousands of protesters, made up of individuals and families with children, on the lawns opposite.

Protest attendees have since taken to social media to complain about symptoms they say are a result of the LRADs. However, The Epoch Times has not been able to independently verify these claims. 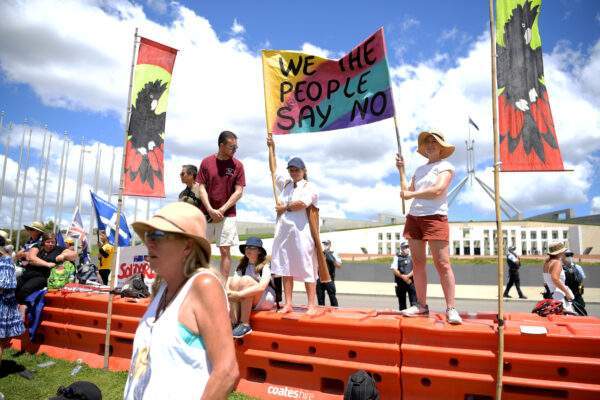 Protesters against vaccine mandates gather on the lawn of Parliament House in Canberra, Australia, on Feb. 12, 2022. (Tracey Nearmy/Getty Images)
Earlier in the week, during a Senate estimates hearing on Feb. 14, senators Alex Antic and Malcolm Roberts sought confirmation from AFP Commissioner Reece Kershaw about whether the sonic weapons were present and deployed at the protests.

Responding to Roberts, Kershaw said: “That would be something that is with our police methodology which we would have to look at some type of public interest immunity claim, Senator.”

Roberts responded: “Surely it’s in the public interest to know whether or not they were there without delving too much into it?”

“I’d have to … If I could take that on notice, I’d have to get advice,” Kershaw said. 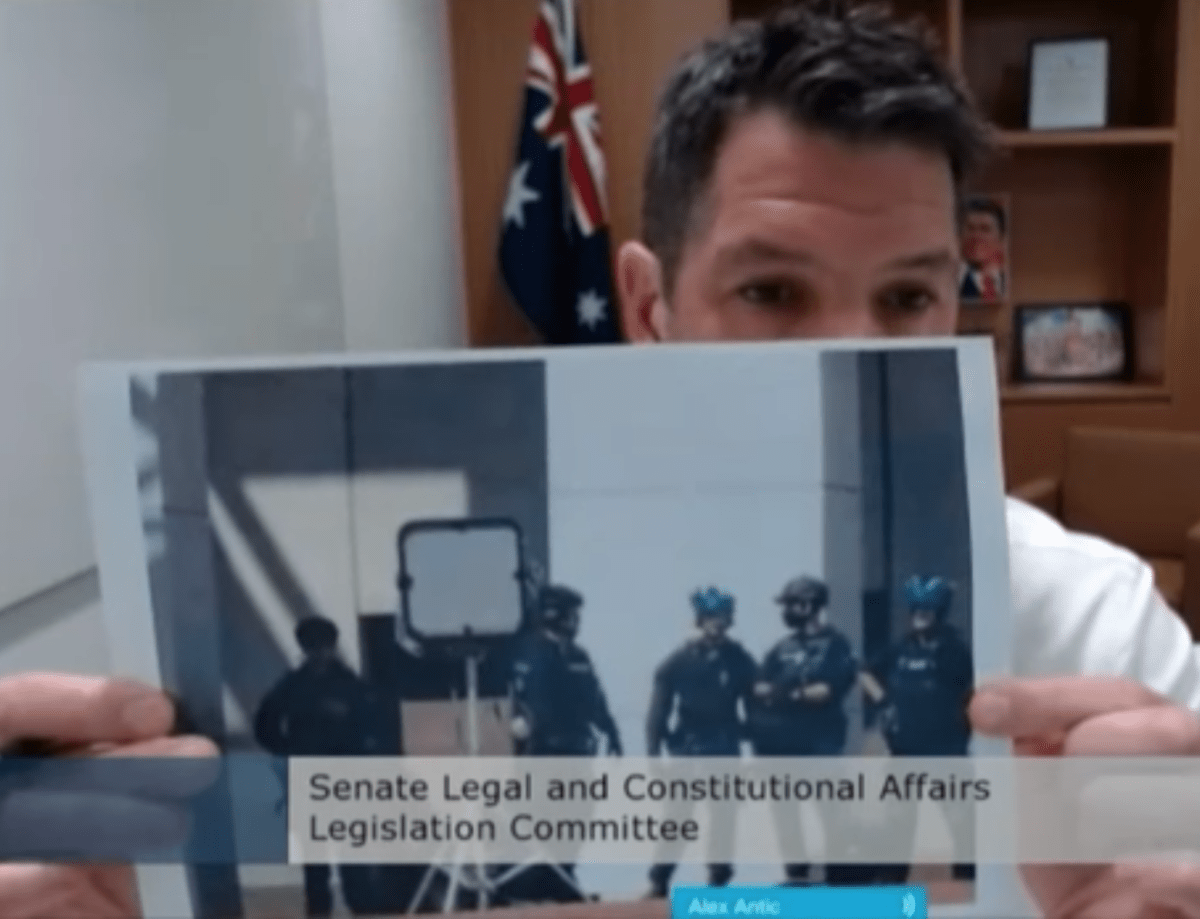 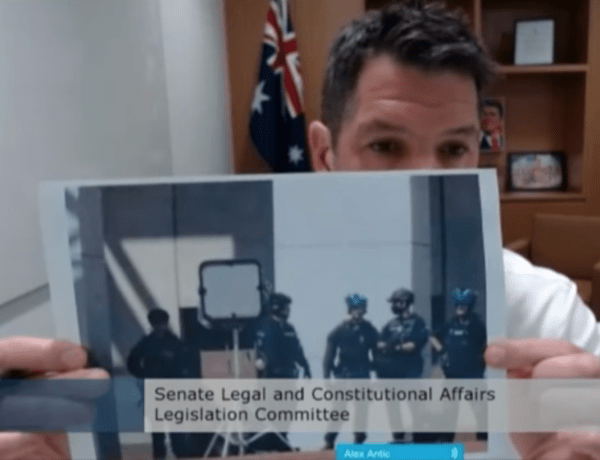 Australian Senator Alex Antic holds up an image of a long range acoustic device that was circulating on social media at a Senate estimates hearing in Canberra, Australia, on Feb. 14, 2022. (Screenshot by The Epoch Times)

Later, Antic, who appeared virtually, held up a photo of the LRADs taken outside parliament in a bid to secure confirmation.

“With the benefit of having that photograph which tends to confirm it, we still can’t confirm that that device was there on the day?” Antic said.

“Yeah, I think to be proper … I’d like to take that on notice,” Kershaw said. 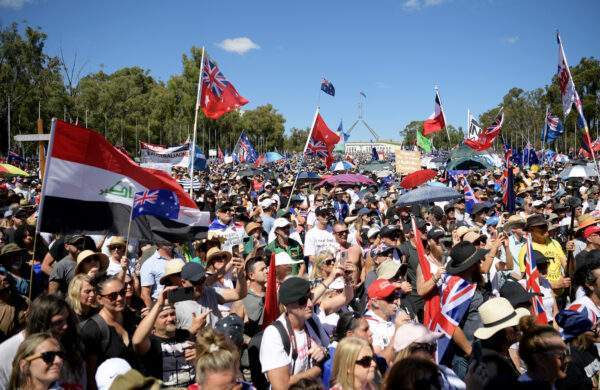 Protesters against vaccine mandates gather on the lawn of Parliament House in Canberra, Australia, on Feb. 12, 2022. (Tracey Nearmy/Getty Images)
Antic noted that police only arrested three people out of the tens of thousands (the actual crowd size is disputed) compared to far smaller protests by other groups held at the same location where arrest numbers were higher.

“Overall the crowd were well-behaved and you probably saw there was … children and families who were involved,” Kershaw said.

“Pretty well behaved. A lot of poor attitudes though, but there’s no offence for that. So police did cop a fair bit of abuse, but again, it didn’t cross into the criminal threshold.”

The anti-vaccine mandates protest was attended by Australians from all walks of life and made up of people who were both vaccinated and unvaccinated but are against the state government mandates.

One federal MP said it was the biggest protest he’d seen in Canberra in his 11 years as a parliamentarian. Meanwhile, Police Commissioner Kershaw told the Senate estimates hearing that it was the largest protest the police had seen since the 1980s.

Caden Pearson
Writer and Editor
Follow
Caden Pearson is a writer and editor based Cairns, Australia, with a background in screenwriting and documentary. Contact him on caden.pearson@epochtimes.com.au