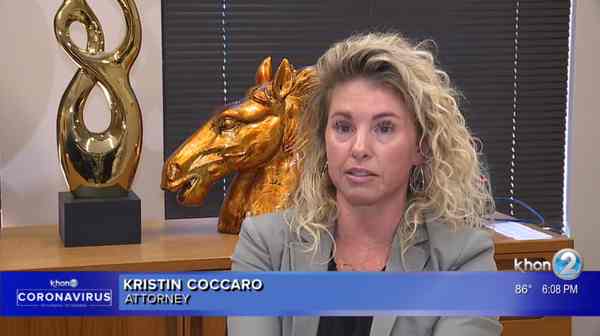 The attorneys announced that they plan to file the lawsuit on Friday in order to try to stop the mandate which takes effect Monday, Aug. 16. This one is on behalf of police officers, firefighters and other first responders.

“They’re just asking for the chance to choose,” said attorney Shawn Luiz. “It’s a personal, autonomous, healthcare decision, and everyone should make their own choice, whether or not they want to take a vaccine or not.”

“I have to choose between that career that I’m committed to or put in an experimental drug that I don’t know what it’s gonna do to me in my body, or I got to give all that up,” said Capt. Kaimi Pelekai of the Honolulu Fire Department.

Pelekai says the City just sent county workers a letter saying they either have to get vaccinated or show proof of religious or medical exemption by Monday — or they could lose their job. KHON2 is asking the City about the letter.

When the governor announced the mandate last week, he said unvaccinated workers have the option of getting tested weekly. Representatives for the union members in the class action lawsuit say this is a violation of their collective bargaining agreement, and it runs into a whole set of problems for the workers.

“If they can’t prove the testing because they’re waiting for their free tests and they’re going to be home without pay. So it’s almost the same result as being fired. You’re having a large majority of our first responders off the street without pay and being punished,” said attorney Kristin Coccaro.

“The heavy-handedness that we are now seeing is shocking to the conscious for Hawaii especially, and there’s got to be a voice,” said Green.

The City confirmed the letter that was sent to workers and released a statement from the Honolulu Mayor Rick Blangiardi saying, “I stand behind the decision to protect City employees, their families and our communities, while also reducing the number of positive COVID-19 cases.”

A spokesman for the state attorney general says, “The State is confident that its vaccine and testing policy is lawful and constitutional.”

Although there are a number of free testing sites, those who are unable to go to them will have to pay for their own. Exemptions will be provided, but it is still not clear how those will be determined. Those who do not comply, however, could lose their job.

HGEA, and other public workers unions such as UPW, and those representing teachers, police officers, UH professors and firefighters said they encourage their members to get vaccinated. Still, they said the unions should have been consulted.

Watch the full news conference below:

“Some of the strongest unions in the country are here in Hawaii, and the governor threw his emergency proclamation order [to] destroy the unions’ abilities to fight for their employees,” Green said. “We have thousands of people who are told, ‘You are going to take this vaccination or you won’t have a job.’”

Green said the next chapter that follows is these workers filing for unemployment but unable to receive anything because they were terminated.

Pelekai gave an impassioned speech about having to decide between his freedom of choice or continue serving his community.

Watch Pelekai give his testimony below:

“I spent the last 20 years of my life and 37 years watching my dad do this job, and because I didn’t want to put an experimental drug in my body, I got to give that all up?” Pelekai said.

Check out more news from around Hawaii

According to Pelekai, the 1,200 union members included in the class action lawsuit came together to organize it. He anticipates more members will join.