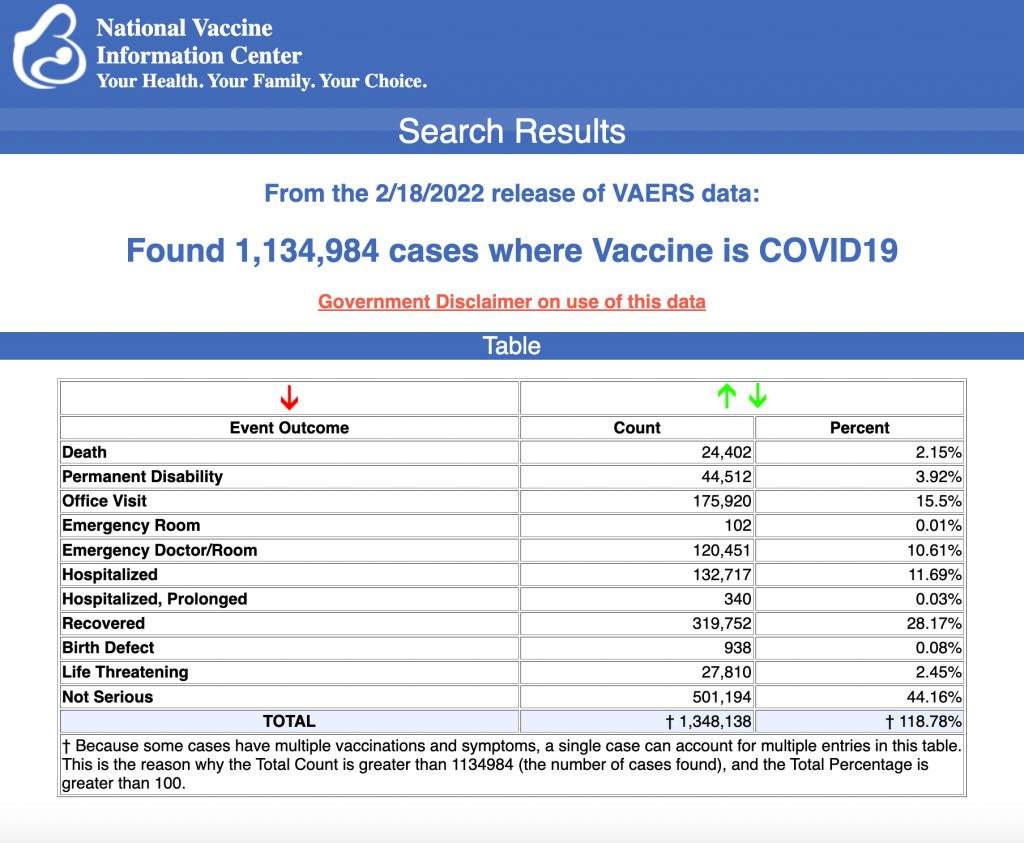 The Centers for Disease Control and Prevention (CDC) today released new data showing a total of 1,134,984 reports of adverse events following COVID vaccines were submitted between Dec. 14, 2020, and Feb. 18, 2022, to the Vaccine Adverse Event Reporting System (VAERS). VAERS is the primary government-funded system for reporting adverse vaccine reactions in the U.S.

Every Friday, VAERS publishes vaccine injury reports received as of a specified date. Reports submitted to VAERS require further investigation before a causal relationship can be confirmed. Historically, VAERS has been shown to report only 1% of actual vaccine adverse events.

The most recent death involves an 8-year-old boy (VAERS I.D. 2109625) from Mississippi who died 7 days after his second dose of Pfizer’s COVID vaccine when he was found blue and lifeless at home.

He was taken to the hospital with a full code in process. A pulse was detected several times, but the boy ultimately died in the ICU. It was reported to the doctor who filed the report that the boy died from multisystem inflammatory syndrome. He did not have COVID.

The most recent death involves a 13-year-old girl (VAERS I.D. 2115839) from Wisconsin who was severely compromised and received two doses of Pfizer’s COVID vaccine. Although the cause of death wasn’t clear, she appeared to have significant health issues, respiratory distress and heart problems.

A 24-year-old college student died on Oct. 27, 2021, six weeks after receiving his second dose of Pfizer’s COVID vaccine. George Watts, Jr., New York, needed to be vaccinated to attend college classes. He got his first Pfizer shot in August and a second dose in September.

After his second dose, Watts felt sick, started to get puffy in his face and developed a cough. He was treated at the emergency room with antibiotics for a sinus infection, but his symptoms continued to worsen.

Watts began coughing up blood, his feet and hands were hurting and he couldn’t tolerate light. Watts’ father was going to take him back to the emergency room, but his son collapsed that morning and died.

Watts’ father said his son was healthy and had no underlying health conditions. An autopsy report from the Bradford County Coroner confirmed Watts died from “COVID-19 vaccine-related myocarditis.”

The Coroner said its office is also working on other cases in the county related to COVID vaccines and boosters.

Because Watts’ case does not meet the CDC’s case definition of myocarditis, as he did not experience “symptoms such as chest pain, shortness of breath and feelings of having a fast-beating, fluttering or pounding heart” and receive “medical tests to support the diagnosis of myocarditis and rule out other causes,” his case was not included in safety data shared by the agency with advisory panels that monitor the safety of COVID vaccines.

A family whose 21-year-old son developed a life-threatening reaction to Pfizer’s COVID vaccine has been waiting six months to learn if the U.S. government’s Countermeasures Injury Compensation Program (CICP) will help cover their son’s medical bills.

The CICP program, which operates under the federal Health Resources and Services Administration, provides compensation for serious injuries or death caused by certain medications, medical devices and vaccines, including COVID vaccines.

The family of Kartik Bhakta in August 2021 submitted a claim on behalf of their son. So far, the claim has been ignored.

Bhakta’s school in August stopped covering his medical expenses, which are piling up. Bhakta’s father said the ordeal has been a nightmare and nobody from the CICP has ever followed up on their claim. The family cannot afford his future surgeries without compensation, as they had to quit their jobs to care for their son.

The company said its analysis revealed a “significant alarm signal” and that “a risk to human life cannot be ruled out.” Based on the data collected, BKK said the number of vaccine side effects is many times higher than the number officially announced by the Paul Ehrlich Institute (PEI), Germany’s federal health agency that monitors the safety of vaccines and biomedicines.

The PEI announced in a press release there were 244,576 suspected cases of vaccine side effects reported in 2021 following COVID vaccination, but BKK said its analysis revealed more than 400,000 cases.

BKK board member Andreas Schöfbeck told WELT, a German news publication, “The numbers determined are significant and urgently need to be checked for plausibility.”

Schöfbeck wrote an urgent letter to PEI and other agencies with a request to obtain appropriate data analyses from all health insurance companies.

CDC increases interval between COVID vaccine doses for some people

The CDC said in vaccine guidance updated Tuesday the interval between first and second doses of the Pfizer and Moderna COVID vaccines may be as long as eight weeks for some people.

The agency said an extended interval for those over age 12 may reduce the risk of myocarditis, a type of heart inflammation, in some populations.

​​”While absolute risk remains small, the relative risk for myocarditis is higher for males ages 12-39 years, and this risk might be reduced by extending the interval between the first and second dose,” the CDC said.

The agency continues to recommend a three- to four-week interval for the immunocompromised, adults 65 and older and others who need “rapid protection” due to an increased risk of transmission.

The CDC still recommends a second dose of Pizer three weeks after the first dose for children under 11 as it said there’s no data for that age group. Children’s Health Defense asks anyone who has experienced an adverse reaction, to any vaccine, to file a report following these three steps.

On October 19, I was sick. It crossed my mind that I had finally gotten the ‘rona, but my wife’s cream of chicken soup and a few extra hours of sleep into mid-afternoon had be back up and running after a sleepless night before.

When I finally stumbled over to my computer in the evening, I was met with a deluge of concern from readers. They asked what had happened as only one article had been posted that day. Generally, we post between 10-20 daily between all of the sites, not included curated and aggregated content. Seeing that we’d only posted my super-early morning article before taking the rest of the day off had readers assuming the worst.

We have a wonderful and talented group of writers who volunteer their time for the sites and their readers. Sharing their amazing perspectives has always been a blessing to us because we cannot afford to hire anyone at this time. But having great writers is meaningless if we don’t have great editors, or at least one additional. My wife helps me read and edit stories from time to time, but I’m a one-man show when it comes to getting the stories posted.

Whenever I highlight our desperate need for donations, I note that we do not receive money from Google ads even though most in conservative media are beholden. I often ambiguously note that the money donated will help us grow. Today, I’m highlighting a specific need. We must get an editor to help take some of the load and to expand on our mission of spreading the truth to the world. One sick day proved that.

The great news is that there is no shortage of people who CAN help. I am emailed variations of resumes every week by people who are much smarter than I am. As much as I’d love to hire some of them, we simply cannot. That takes money and as blessed as we’ve been to receive donations and collect ad money (though not from Google or Facebook), we have still fallen short.

Those who have the means, PLEASE consider donating. We have the standard Giving Fuel option and people can donate through PayPal. We are also diving into what we believe is extremely disruptive technology at LetsGo.finance, the world’s first major donation portal for crypto. I’ll be talking a lot more about them in the near future. Those who prefer Bitcoin can send to my address here: 3A1ELVhGgrwrypwTJhPwnaTVGmuqyQrMB8

We can get the voices out there and we’re willing to shine a spotlight on new talent. We just need the resources to make it happen. If you can help, we would be extremely grateful.

Thank you and God bless!

All ORIGINAL content on this site is © 2021 NOQ Report. All REPUBLISHED content has received direct or implied permission for reproduction.

With that said, our content may be reproduced and distributed as long as it has a link to the original source and the author is credited prominently. We don’t mind you using our content as long as you help out by giving us credit with a prominent link. If you feel like giving us a tip for the content, we will not object!