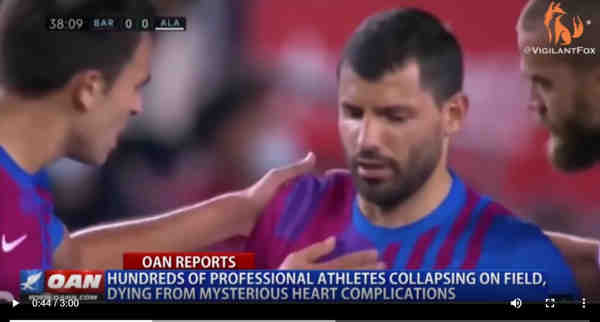 769 young healthy athletes have collapsed while competing in the past year due to suffering from sudden and unexpected illnesses.

Huge spikes in the number of athletes collapsing during games have been seen in sports around the world.

An unusually high number of games have been halted due to players suddenly passing out, with many often seen gripping their chests in agony, unable to breathe due to sudden cardiac events.

This staggering wave of heart issues is unprecedented among such healthy groups of people.

Never before have we seen young, healthy, world-class athletes experiencing heart issues en masse like this.

It has never happened, ever.

Furthermore, the timing of this sweeping phenomenon could not be more relevant.

According to an explosive new report by OAN, the number of affected athletes runs into the hundreds.

In all, their investigation found a jaw-dropping 769 men and women who collapsed with heart issues during competition over the past year (between March 2021 and March 2022).

Most shockingly, the average age of those who experienced full-blown cardiac arrest was just 23.

OAN’s report raises questions about the timing of this never-before-seen issue in healthy athletes and the universal push for Covid jabs.

“These are just two o more than 769 athletes who have collapsed during a game on the field over the last year.

“The average age of the players suffering cardiac arrest is just 23-years-old.

How many 23-year-old athletes were collapsing and suffering heart attacks before this year?

“Do you know any 23-year-old people who had heart attacks before now?

And these are just the ones we know about.

“How many have gone unreported?

“Nearly 800 athletes – young, fit people in the prime of life falling down on the field.

“In fact, 500% more soccer players in the EU are dropping dead from heart attacks than just one year ago.”

Sharp asserts that the evidence suggests the cases are not a coincidence:

“When the Pfizer vaccine is known to cause heart inflamation? No.

“In fact, many doctors treating these players list their injuries and deaths as being directly caused by the vaccine…

“This is not a coincidence – healthy teenagers dying after getting the Pfizer injection.

“Doctors warned the FDA before they released the experimental vaccine that it would ‘almost certainly cause terrible organ damage.’”