by Megan Redshaw
in Opinions

Data released Friday by the Centers for Disease Control and Prevention (CDC) showed that between Dec. 14, 2020, and Oct. 15, 2021, a total of 818,044 adverse events following COVID vaccines were reported to the Vaccine Adverse Event Reporting System (VAERS).

The data included a total of 17,128 reports of deaths — an increase of 362 over the previous week, and a new report of a 12-year-old who died after getting the Pfizer vaccine.

There were 117,399 reports of serious injuries, including deaths, during the same time period — up 5,434 compared with the previous week. 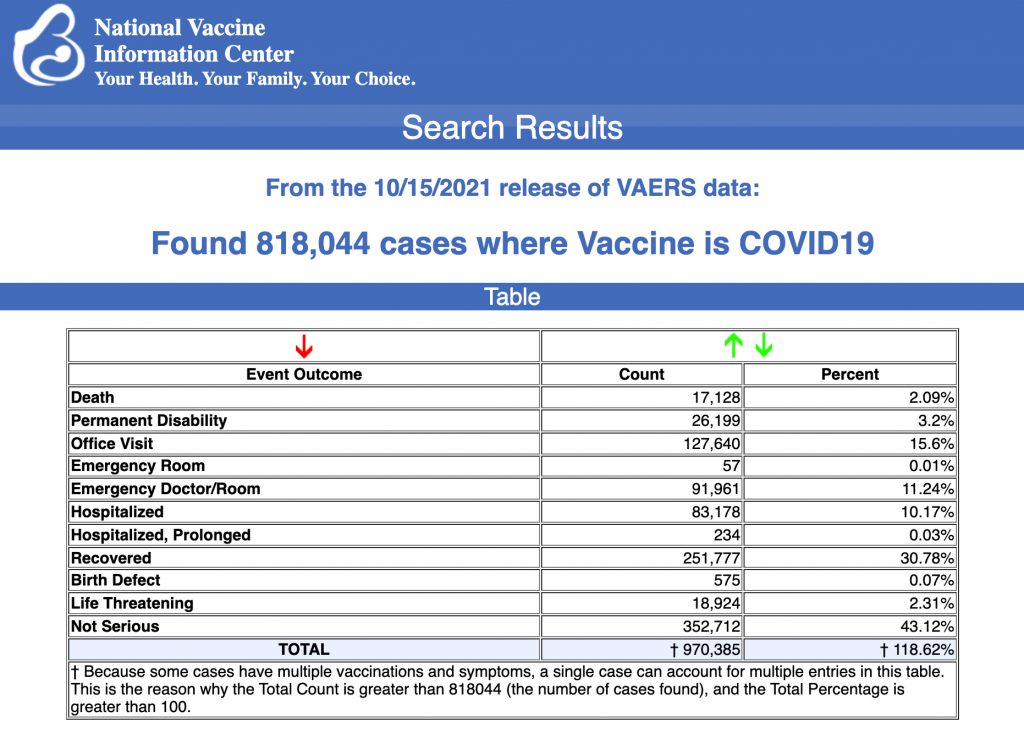 The data come directly from reports submitted to VAERS, the primary government-funded system for reporting adverse vaccine reactions in the U.S.

Every Friday, VAERS makes public all vaccine injury reports received as of a specified date, usually about a week prior to the release date. Reports submitted to VAERS require further investigation before a causal relationship can be confirmed.

The most recent death involves a 12-year-old girl (VAERS I.D. 1784945) who died from a respiratory tract hemorrhage 22 days after receiving her first dose of Pfizer’s vaccine.

The next day he played with two friends at a community pond, swung on a rope swing, flipped into the air, and landed in the water feet first. He surfaced, laughed and told his friends “Wow, that hurt!” He then swam toward shore underwater, as was his usual routine, but did not re-emerge.

An autopsy showed no external indication of a head injury, but there was a small subgaleal hemorrhage — a rare, but lethal bleeding disorder — over the left occiput. In addition, the boy had a mildly elevated cardiac mass, increased left ventricular wall thickness and small foci of myocardial inflammation of the lateral wall of the left ventricle with myocyte necrosis consistent with myocardial infarction.

A 60-year-old woman died from blood clots after receiving J&J’s COVID vaccine, according to an autopsy report released Sept. 20 by Dr. Michael Caplan, a forensic pathologist at Michigan Medicine.